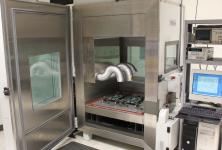 The purpose of HALT and HASS testing is to build robustness into your products from the earliest stages in their development cycle.

They greatly reduce or even eliminate the failures (infant mortality) of a new product.

HALT, Highly Accelerated Life Test, is based on a series of thermal and mechanical tests carried out on equipment during its design phase.

The methodology applied makes it possible to detect design defects and weaknesses in electronic systems and sub-components. Not corrected, these defects may appear during qualification in environments (when this step exists) or once the product is on the market.

The HASS testing, Highly Accelerated Stress Screen, is a screening test. In production, all or part of your equipment is subjected to thermal and mechanical stresses with severity levels resulting from HALT tests.

When compared to a product's life cycle, HALT & HASS tests allow you to influence the 3 phases described by the bathtub curve model representing variations in failure rate as a function of the product's life duration. 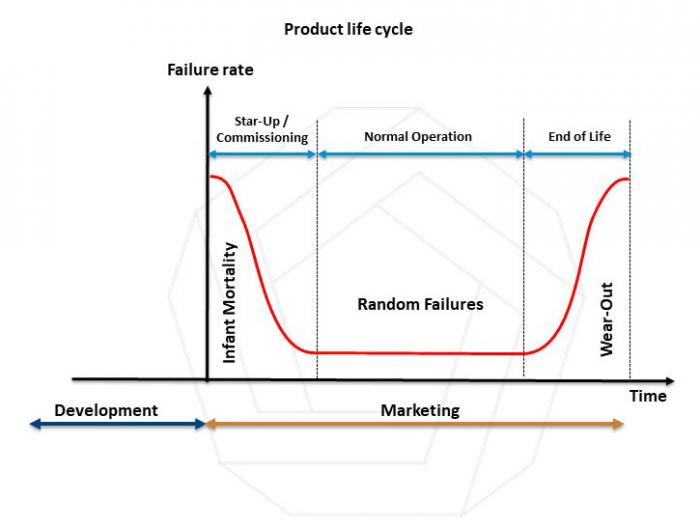 HALT testing is part of the accelerated life testing approach, whose philosophy is to explore how the product works in test conditions beyond its specifications.

In concrete terms, thermal and mechanical stresses will be applied regardless of the product's life profile. A priori, no stress level limit is set beforehand and vibration tests will even be applied for fixed equipment.

The purpose of HALT testing is not to simulate an environment to check the proper functioning of an equipment, but to stimulate a product until it knows its operating limits or those of destruction.

The analysis of the causes of failures and corrective actions allow to build the robustness of a product and eventually to exceed the constraints of its life profile to further increase its reliability.

What sources of failures are targeted?

The HALT tests are addressed directly to the 3 sources of operational failures:

Overview of the HALT methodology

HALT methodology for the application of different stresses is as follows:

Specific constraint of the equipment may be added.

The HALT methodology in detail

Logic of the HALT process, usually the least destructive test is performed first.

The characterization of the lower temperature operating limit followed by the lower limit of robustness (or destruction, if this occurs before the "floor" temperature defined at the preliminary meeting is reached) is achieved by a stepwise lowering of the temperature.

The steps must have a sufficient duration (usually 10 min) to ensure that the functional tests are carried out correctly, but also to ensure that the stress is applied at a stabilised level. Hot step testing is done in a similar manner.

Dynamic process for reliability, HALT is not limited to detection of operation/destruction thresholds.

Whether it's for the temperature resistance test or for other types of constraints that follow, the HALT pushes the limits of the product by a dichotomous approach to design improvement.

For each failure is associated with an analysis of the root causes of failures followed by corrective actions, in theory, until the fundamental limit of the underlying technology is reached.

The third stress applied in HALT is rapid thermal extremes : the produc is functionally tested continuously while the product temperature is changed as rapidly as allowed by the chambre. As a consequence of this dynamic approach to the construction of reliability, the rapid change temperature testing (70°C/min), which follows on from the cold and hot testing, shows only a very small percentage of failures on average compared to other types of stress (4% against 14% for cold and 17% for hot).

The upper and lower limits of these ramps are determined by the results of the step thermal stessing, and stay within the operating limits found there

The product is then subjected to vibrations testing which, with a failure rate of 45%, outperforms the last type of stress applied in the HALT, the combined vibration, temperature and rapid change temperature testing with its 20%.

An exploration on 6 axes, 3 linear and 3 rotary axes, allows an optimal characterization of the product.

The combined testing includes all the stresses previously applied.

The thermal part of the profile, temperature transition change, duration and exposure level in low and high temperatures.

The first temperature cycle is carried out with a constant acceleration level of about 3 to 5 grms. At each cycle, this value is increased by the same increment as in the previous vibration test.

The high failure detection rate (20%) for an equipment that has already benefited from improved robustness for each separate constraint highlights the influence of temperature on the phenomena of responses to mechanical stresses and justifies the appropriateness of applying combined stresses at the end of the HALT process.

The equipment used to do HASS is similar to that used in HALT, although often a larger chamber is used to accomaodate production quantities.

The fixturing can be quite different in HASS simply o accomodate the production flow (speed with which products can be fixtured, number of products,  ...)

The HASS profile is deduced from the HALT after all the corrective actions have been taken into account.

For example, the initial profile before validation of the POS can be built around a temperature excursion at 20% of the operational limits detected in HALT with a minimum delta of 100°C and with a vibration acceleration level half the level leading to destruction in HALT.

The HASS profile must be validated by a POS which takes into account the mounting arrangement of the products in the chamber. This assembly is one of the most delicate elements to be carried out within the framework of the HASS since it must allow a simultaneous passage in test of a maximum of products by guaranteeing that each one of them will be subjected to the same mechanical and thermal stresses.

As soon as the HALT characterization reveals sufficient margins between the functional limits and the destruction limits, the HASS profile is broken down into two phases, one called precipitation screen, which, by using stress levels above the functional limits but below the destruction limits, transforms latent defects into obvious defects, and the other, detection screen, with exposure times at high and low temperatures sufficient to prevent them from occurring.

The PoS is performed once the HASS parameters have been determined. It consists in applying to the same number of products as foreseen by the assembly 20 to 50 times the test cycle defined in HASS by combining test products incorporating manufacturing defects (such as improperly welded wires) with products from the series production. The goal of the PoS is to adjust the HASS profile so that defects can be detected as early as possible in the first cycle, but without causing failures on "healthy" products or significantly reducing their shelf life.

This last aspect is verified by counting the number of cycles required for healthy products to develop symptomatic end-of-life defects.

Once the PoS is completed, HASS can be applied in production. 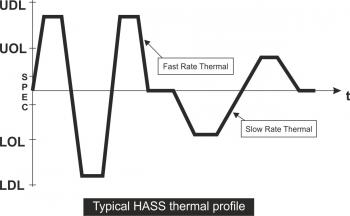 Our training courses are aimed at all those involved in the design, manufacture or marketing of products and who have to comply with applicable regulations or qualification requirements.