Pollutant emissions are increasingly being incorporated into the type approval process.This page focuses on the requirements for cars and utiliy vehicles, but these requirements also apply to trucks, buses, coaches, agricultural and construction vehicles, as well as two- or three-wheel vehicles and quadricycles.

Previously based on the emission standards and permissible limits for petrol and diesel engines for passenger cars and light commercial vehicles defined by the European Directive 70/220/EEC, the latter was repealed in 2013 by Regulation (EC) 715/2007 which establishes the Euro 5 and Euro 6 standards.
The corresponding application for EC type-approval is submitted by the manufacturer or his authorised representative to the competent authority of the Member State, which in turn issues an EC type-approval certificate.

Since 2014, the Euro 6 standard has been applied and has itself evolved with, in particular, the increase in the number of tests under real driving conditions. From now on, a vehicle must satisfy a whole series of tests concerning :

Our main facilities and associated activities

Review of the European Euro 6 standard

Since 1 January 2021, the Euro 6.d Full standard will tighten up the rules on pollutant emission thresholds that must not be exceeded. Carbon monoxide (CO), hydrocarbons (HC) and nitrogen oxide (NOx) are particularly targeted.

The future Euro 7 standard, which is due to come into force in 2025, promises to be even more demanding, requiring the requirements to be anticipated in the design and validation phases. It should mark a harmonisation between petrol and diesel engines in terms of pollutant gas emissions, a reduction in the levels of pollutant gas emissions (in particular nitrogen oxide emissions), a reduction in the size of the particles taken into account (10 nm instead of 23 nm) in the calculation of the number of particles, more varied driving condition profiles (driving profile, road profile, temperature, altitude, etc.) and broader testing in real driving conditions.

WLTC test cycle, a cycle performed on a roller bench

The WLTC is a dyno-based cycle, similar to the NEDC cycle. However, the tooltip tip="Worldwide harmonized Light vehicles Test Cycle" position="top"]WLTC aims to correct the weaknesses of the NEDC. It includes stronger acceleration and higher average speed. Nevertheless, being a laboratory test, there is always a gap between the consumption evaluated during the test and the one reached in reality.

WLTP was developed under the auspices of the United Nations (specifically the United Nations Economic Commission for Europe - UNECE) by international experts (in particular from Europe, Japan and India) and defines a new set of procedures for measuring vehicle emissions during type approval. Among other things, it includes a new test bench driving cycle, i.e. a speed profile followed by type approved vehicles. This new cycle is called the Worldwide Harmonized Light Vehicles Test Cycle (WLTC). As the WLTC is still a test bench cycle, it cannot be completely faithful to reality, partly because reality is variable and cannot be unified in a single cycle. To best address this problem, the WLTC is supplemented by a road cycle, the RDE, which is much closer to reality.

The NEDC (New European Driving Cycle) was broken down into two cycles: the urban cycle and the extra-urban cycle. The measurement was carried out on a run-in vehicle (with more than 3,000 km on the clock) placed on a roller bench to simulate driving resistance (influence of the vehicle's aerodynamics, tyre friction on the road). The vehicle had to be at its kerb weight (fully loaded and with a 75 kg driver).

The WLTP homologation tests are carried out on vehicles that have been driven a maximum of 80 km on the production line. The WLTC tests are carried out at a temperature of 23°C. The measurements are made considering a cold start (the coolant is therefore not at its optimum temperature at the start of the test). As with the NEDC cycle, the consumption of accessories (air conditioning, car radio, etc.) is not taken into account. 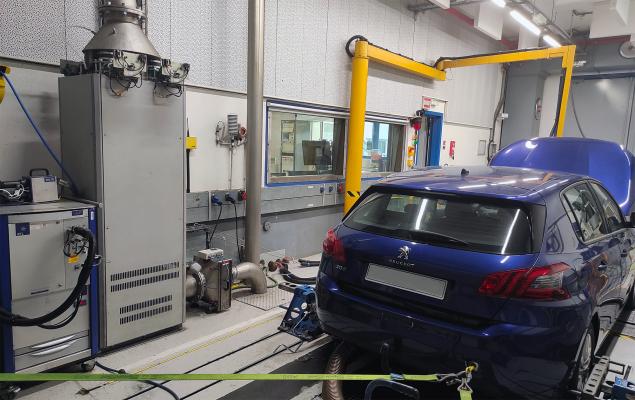 Our roller bench located near Paris

These low temperature emissions tests are primarily for petrol engines. For diesel engines, the low temperature tests must demonstrate that the NOx treatment devices are operational at the latest 400s after a cold start (ambient temperature of -7°C)

These tests are carried out in an automotive climatic test cell equipped with a roller bench.

Measurements under real driving conditions RDE, measurements made with PEMS

Measurements in real-life driving conditions make it possible to correlate the emissions of pollutants between the measurements carried out in the laboratory for the homologation cycle and the vehicle driven on the road every day.

All greenhouse gas and pollutant emissions are measured during an RDE test, but only NOx emissions are discriminating. For example, for Euro 6d full, NOx emissions must not exceed 1.5 times the permissible emissions for a vehicle approved to this standard.

The RDE tests are carried out on open roads. They follow the different stages of the WLTC cycle. They must therefore start with an urban section, followed by an urban section and a motorway section. The real-life driving tests are conducted on roads with an altitude of less than 700 metres and temperatures between 0°C and 30°C.

We offer RDE driving cycles with our PEMS near Paris.

The abbreviation EVAP stands for evaporation. These tests aim to quantify the evaporation process of hydrocarbon compounds. Standards that carry the suffix Evaporation Test require a test in which all pollutants emitted by the vehicle are measured. This test is only applicable to petrol engines, due to the highly volatile nature of this fuel. The evaporation test takes into account the vapour emissions from a stationary vehicle, the emissions from an operating vehicle and the permeability of the system.

Vapour emissions from a parked vehicle are assessed with a complete vehicle parked in a sealed enclosure where the hydrocarbon concentration is measured after 24 hours and then after 48 hours. During this time, the temperature varies from hour to hour between 20°C and 35°C.

In order to characterise evaporation losses during driving, the vehicle is subjected to a part of the WLTC test cycle (only the extra high speed part is not performed, it is replaced by the repetition of the medium speed part). Immediately after the cycle is completed and the engine is switched off, the vehicle is parked in the test chamber.

Idling emissions measurements are only relevant for petrol engines. They are aimed at carbon monoxide (CO) emissions with a CO content not exceeding 0.3%.

These measurements are only carried out for vehicles with spark ignition engines. To measure the efficiency of the suction system, the vehicle is put on a chassis dynamometer and subjected to 3 different configurations: engine idle, vehicle running at 50 km/h and vehicle loaded at 50 km/h.

The purpose of this durability test is to assess the degradation of the emission control systems after the vehicle has been driven for a significant amount of kilometres.

The test can also be carried out on a complete vehicle with 160,000 km driven on a chassis dynamometer (or on the road). 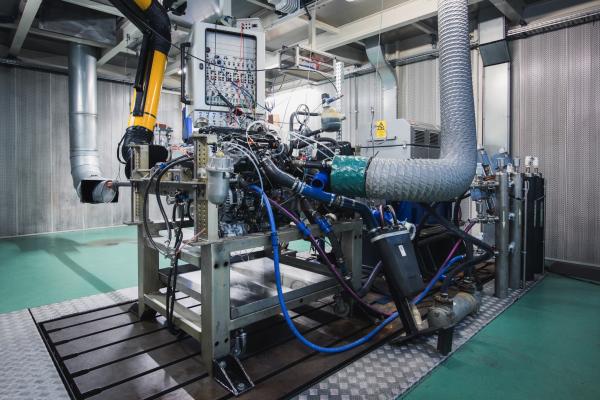 For an internal combustion engine, the power and torque characteristics are evaluated on an engine test bench, including the components essential to its operation and, if possible, without the gearbox. The engine's power mapping is carried out by recording these values over all possible speeds (from idle speed to maximum speed).

For electric motors, the power measurement is carried out in two phases.
In the initial phase, the motor power is measured from 0 to maximum speed. In the second phase, the engine power is evaluated over a period of 30 minutes in a speed range that corresponds to the speeds where the engine delivers 90% of the maximum power measured in the first test. 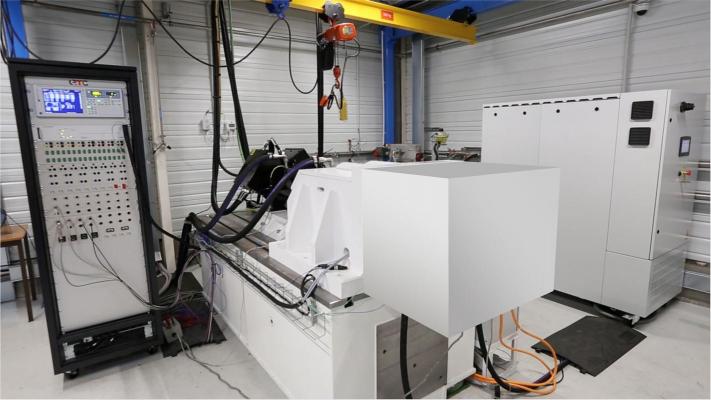 This test concerns vehicles already on the road, which must also have remained compliant with emissions regulations. These tests are compulsory for all approvals from 1 January 2019 and for all new registrations from 1 September 2019.

The manufacturer must guarantee the vehicle's compliance with the type approval data for a minimum of 5 years or 100,000 km, whichever comes first. In-service conformity concerns the emission tests for pollutants, both in the laboratory and in real driving conditions, and the evaporation tests.

The objective of this commission is to converge the approval procedures between the member states. The follow-up to GTR No. 15 (Global Technical Regulation No. 15) provides an overview of the progress made towards this objective: ECE/TRANS/180/Add.15/Amend.6.

To go even further

Two and three-wheel vehicles and quadricycles are also affected

Emission requirements apply to two and three-wheel vehicles and quadricycles through EU Regulation 168/2013. The European emission standard, EuroIV, came into force on 1 January 2017 for new motorised two-wheelers over 125cc and on 1 January 2018 for smaller engines. The Euro V motorbike standard has applied since 1 January 2020 (with a one-year transitional period and a derogation until 1 January 2024 for certain categories of vehicles: enduro and trial motorbikes, three-wheeled utility bicycles and light quadricycles).

The Euro V motorbike standard lowers the level of polluting exhaust emissions, and in this case corresponds to the Euro 6 automobile standard.

The Euro V motorbike standard also requires the introduction of a second level of on-board diagnostics (OBD II) for vehicles already equipped with an OBD I system. It must also intervene to specify new maximum noise emission thresholds.

European emission standards, known as Euro standards, are European Union regulations that set maximum emission limits for vehicles on the road. The Euro 6.2 standard is also known as Euro 6.d-TEMP. In January 2021, it will be succeeded by the Euro 6.3 standard, also called Euro 6.d or Euro 6.d full

This homologation cycle is intended, among other things, to evaluate a vehicle's fuel consumption and emissions of polluting and/or greenhouse gases.

NEDC: New European Driving Cycle – A former validation cycle carried out on a chassis dynamometer required to approve a vehicle and designed to assess fuel consumption and emissions of pollutants and/or greenhouse gases.

The main emissions released by combustion engines, the thresholds for which are set by European regulations.

NOx: nitrogen oxides - a gas that is harmful to the respiratory system and responsible for the formation of air pollution haze (smog)

These devices are attached to the vehicle for testing under real conditions. They are sufficiently compact and light (less than 150 kg) to allow realistic measurements and they allow the most significant pollutants to be measured (CO, CO2, NOx, particles in number and mass).

Euro 6d standards now require all vehicles to be fitted with an energy consumption indicator (known as OBFCM) which the manufacturer must demonstrate is accurate for type approval purposes. The OBFCM is mandatory for all new vehicle types from 1 January 2020 and for all newly registered cars from 1 January 2021. In order to comply with the requirements of the future Euro 6d-ISC-FCM standards, the manufacturer must make available the following data: the total fuel consumption since the vehicle left the factory (without taking into account consumption due to the possible presence of stationary heating), the total distance travelled by the vehicle, the fuel flow rate and the vehicle speed. 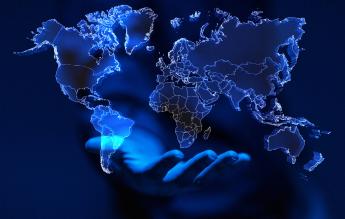 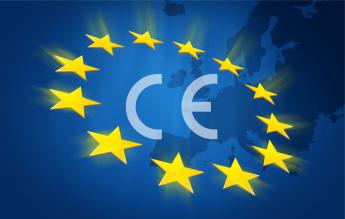 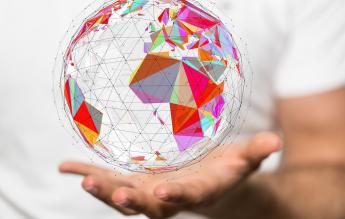 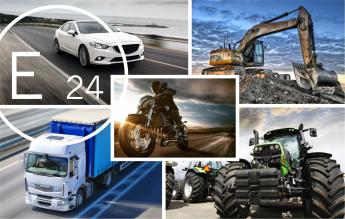 Our measurements on roller benches, PEMS...