A test bench is a set of equipment installed in a room generally tempered and ventilated.  It can be very simple in the case of elementary engine function tests, or very complex in the case of simulation of real operation of a PWT or a complete vehicle.

Our engineering department has a strong expertise in this field having already designed many benches for our internal needs (powertrain test bench, e-motor test bench, ElectroMagnetic Compatibility test bench, etc.) and to cover the needs of our customers.

Our services on test benches can have several objectives. It can be about tests :

Which test benches for which uses

The test benches for testing vehicles and their various components (complete powertrain or sub-assemblies) are almost as numerous as the parameters that need to be optimized for more efficient mobility.

Depending on whether the vehicles are hybrid, electric or even use a hydrogen fuel cell, different performance topologies are to be considered: 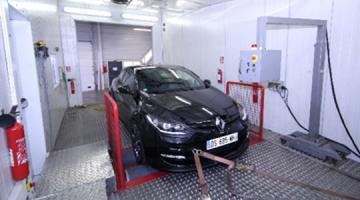 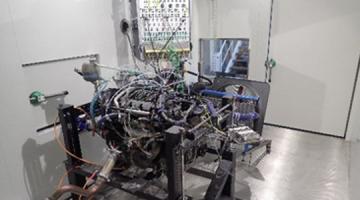 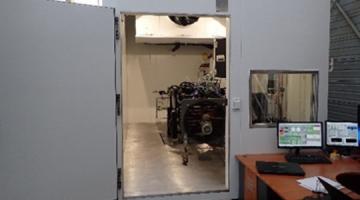 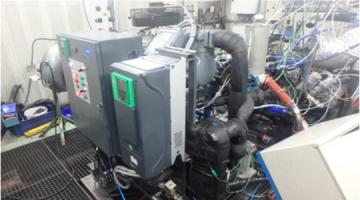 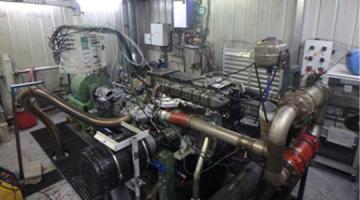 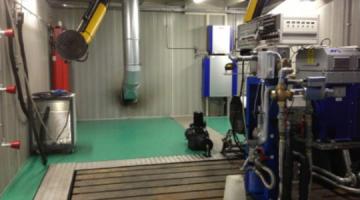 A dynamometer is a device that allows the simultaneous measurement of the torque and rotational speed (rpm or tr/min) of a motor, engine or any other primary rotary engine, in order to calculate its instantaneous power, usually displayed by the dynamometer itself in the form of kW.
By recording a multitude of torque and power values at different speeds, a curve is derived that represents the overall performance of the motor.
In addition to being used to determine torque or power characteristics, dynos are used in standard emissions testing, but also to simulate the road load of the engine or the entire powertrain.

Beyond simple power and torque measurements, dynamometers can be used as part of a test stand for various engine development activities, such as calibration of engine management controllers, detailed combustion behavior studies, etc.
The use of a chassis dynamometer allows to get rid of many parameters influencing full-scale tests (human factor, driving conditions, weather...) and ensures the reproducibility of the tests. It is adapted to validate the consequences of adjustments and modifications.
In most cases, it is necessary to reproduce or simulate all the functions present on the engine in the real application (power steering, alternator, vacuum pump of the braking circuits, air conditioning...).
Thus, for an engine test bench, the engine is associated via a transmission with a load machine (controlled by the engine test bench control) simulating its environment.

The two main operating modes of test benches (braking only or braking and drive) define the two main categories to which they belong: stationary benches and dynamic benches capable of reproducing transients with or without energy generation.
These 2 operating modes correspond to a vehicle, in the acceleration phase (the engine is requested to deliver the power necessary for the vehicle to reach the required speed) and in the braking or engine drive phase (the inertia of the moving vehicle drives the organs and the thermal engine).

Dynamometers have often used eddy current brake type devices as load machines, the control of which imposed a relatively constant resistive torque on the motor under test. These devices are now often replaced by an electric machine which has the advantage of being more dynamic and can supply energy (not just consume it).

During the acquisition measurements, each combination of engine speed (rpm) and torque supplied corresponds to an engine operating point. Given the variations in the dynamic behavior of combustion, hybrid and electric engines according to their operating point, it is necessary to verify the ability of the engine control to ensure the required performance for all operating points of the engine field.

.A stationary test bench uses a brake to measure the characteristics of the motor. It is a question of measuring the resistance that the brake opposes to the engine. For a given engine speed, the dynamometer associated with the dyno's braking device can determine the corresponding applied force.

The engine to be tested drives a flywheel (an inertia wheel) whose inertial mass is known (calculated - The moment of inertia J=1/2 m*R² - for a full cylinder with m : the mass and R the radius of the flywheel. The energy developed is: E=1/2 J*ώ²).

The more powerful the engine, the higher the speed to time ratio. By making a multitude of measurements of the speed of the flywheel during acceleration we can calculate the torque and power of the motor.

If there are ways to measure the power, the inertial and the braked. The dynos can often do both knowing that the inertial is the most widespread. Brake dynos have the advantage of being able to simulate an additional load on the vehicle in order to measure the impact of constraints (load, slope etc.).

They talk about us