Cycling tests are essential in the battery design/validation phase.

Repeated battery cycling (charge/discharge) tests are used to validate that the battery's performance meets the reliability and life expectancy of the final product or to make the necessary adjustments to achieve this goal.

Life is generally defined as the number of charge and discharge cycles a battery can complete before its rated capacity falls below 80% of its original rated capacity.

Temperature, charge/discharge rates and depth of discharge all have a major influence on cell life. 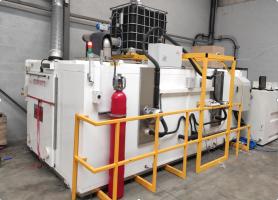 Depending on the purpose of the tests, temperature and depth of discharge should be controlled to an agreed reference level to obtain reproducible results that can be compared to a standard. The tests can also be used to simulate operating conditions where the temperature may increase or the depth of discharge be limited, to determine how cycle life will be affected.

With test procedures tailored to each battery type, the different ageing mechanisms that have the greatest impact on battery life can be revealed.

The standard procedure is to charge and discharge the battery (pack, module or cell) repeatedly at the recommended charge and discharge rates. Temperature cycling tests are also often carried out, in which the test temperature is raised and lowered by placing the equipment under evaluation in a thermal chamber.

A combination of load/unload profiles is usually used.

A new subsidiary of the Emitech Group, R&D Moteurs

Located in the heart of the North Franche Comté automotive cluster, R&D Moteurs was inaugurated on October 28, 2011 in Brognard.

Sustainable mobility solutions are evolving, the Emitech Group supports you