Emitech recognized as a Certification Body (NCB) under the CB sccheme

Emitech has its own international certification service since 2014 called Emitech Certification.

Accredited ISO 17065, that is to say a product certification body, Emitech Certification first became Notified Body under the CE Marking. As such, it issues certificates of conformity under the RED 2014/53/EU directive, specific to radio communication equipment, and the EMC 2014/30/EU directive (electromagnetic compatibility). The aim is to give an opinion on the conformity of a product for which no harmonized standards exist yet, to extend the validity of a test report to an entire range of products, to validate the integration of sub-assemblies by partial tests or on a voluntary approach by a manufacturer.

Emitech Certification supports manufacturers in the international marketing of their products. It takes care of the technical and administrative procedures, arranges for local tests to be carried out if necessary to obtain approval and chooses the most suitable procedure. The CB Scheme is thus the most effective way to approach the international market in more than 50 countries around the world. Within the framework of the CB scheme, Emitech's international certification service has just been recognized as a NCB (National Certification Body). lt can now manage laboratories in the network, the CBTL (Certification Body Testing Laboratory), and deliver thanks to their reports, CB certificates recognized in the member countries.

The CB Scheme, a process of mutual recognition of test results between participating countries

The CB scheme is an international certification program for the exchange and acceptance of product test results from recognized participating laboratories, "the CBTL", and the National Certification Body "the NCBs" in more than 50 countries around the world. The CB Scheme aims at the constant harmonisation of requirements on the electrical safety of products as well as on electromagnetic compatibility at international level, but also takes into account national deviations. Thanks to the mutual recognition of CB certificates between countries, the tests carried out are recognised in these member countries. This makes it easier to market products abroad and opens up manufacturers' access to marks (NF, etc.).

In this frame, four of the Emitech laboratories have already been recognized for several year as CBTL in the following category: medical, laboratory, multimedia and information processing equipment. A CBTL must depend on a single NCB. Since April 2020, Emitech's Certification service is recognized as a National Certification Body under the CB scheme. This means that this service can now issue CB certificates from its own CBTL laboratories.

Emitech supports its customers in their process of launching their products on the international market in a global way. The total control of this process within the framework of the OC Scheme gives it great autonomy and increased reactivity. This recognition is part of a strategy to internationalize Emitech's offer, which was put in place at the creation of Emitech's certification service. 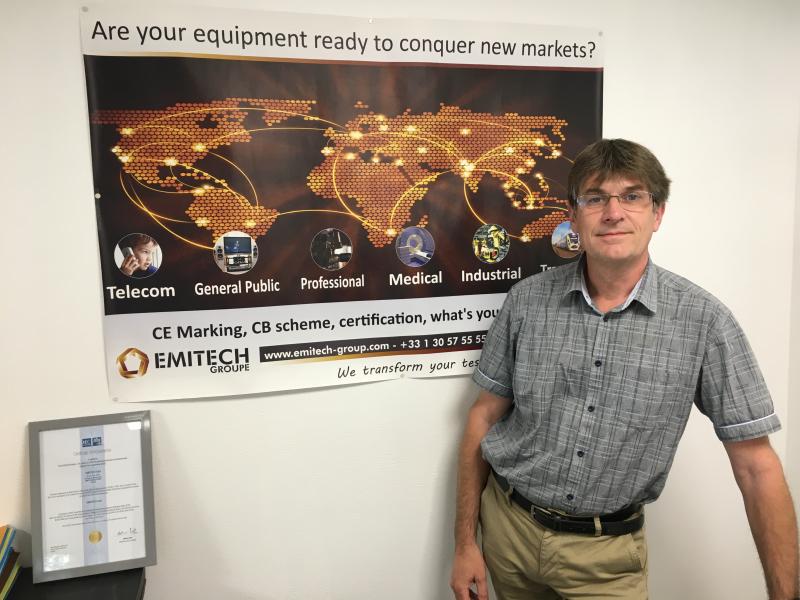 Emitech's headquarters are located in Montigny-le-Bretonneux (78).

The EMITECH Group has more than 550 employees and, with a forecast 2019 turnover of €55 million, reinforces its position as leader in environmental testing.

Emitech recognized as a Certification Body (NCB) under the CB sccheme